The relative resilience of Ether in May’s cryptocurrency rout has put the spotlight back on the idea that the second-largest digital token could one day overtake Bitcoin by market value.

Right now the largest virtual currency is more than twice as big as Ether but the gap narrowed by about $350 billion in May, courtesy of one of Bitcoin’s worst drops and a smaller retreat in Ether. Fans of Ether cite its popularity for blockchain-based financial services and digital collectibles, as well as an ongoing upgrade to boost the efficiency of the affiliated Ethereum network.

Ether “will likely exceed Bitcoin at some point in the future, as Ethereum will be superior when it comes to innovation and developer interest,” said Tegan Kline, co-founder of blockchain software company Edge & Node. But she also said that investors should be allocating capital to both tokens.

The speed of change in the crypto sector makes prognostication perilous. Even so, Goldman Sachs Group Inc. strategists and star investor Cathie Wood are among those who highlighted Ether’s potential recently. More broadly, interest in virtual currencies has expanded out beyond Bitcoin, whose share of $1.6 trillion in total crypto market value is down to 42% from about 70% going into 2021, according to data from CoinGecko. 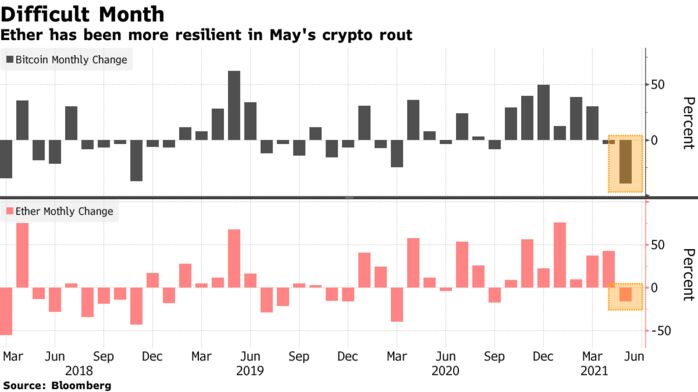 In a report last week, Goldman commodity strategists Mikhail Sprogis and Jeff Currie wrote that Bitcoin’s first-mover advantage appears “fragile,” adding there’s a high chance it will “eventually lose its crown as the dominant digital store of value to another cryptocurrency with greater practical use and technological agility.”

They said Ether seems the most likely candidate to surpass Bitcoin, while adding the rider that such an “outcome is far from certain.” Ether’s annual supply growth is capped, they said, aiding its credentials as a store of value.

Bitcoin is down some 37% in May, one of its worst monthly retreats on record, while Ether has shed about 11%. The largest token retreated 1% to $35,750 as of 8:27 a.m. in London. Ether was little changed at $2,447. Virtual currencies have been under pressure after Elon Musk criticized Bitcoin’s energy profile and China stepped up regulatory rhetoric.

For some, Bitcoin will fend off rivals to stay in top spot, not least because of the sheer amount of attention it gets. For instance, Andrew Kiguel, chief executive of Tokens.com, argues Bitcoin has “the best outside validation signals” given how institutions and tycoons like Musk keep talking about it.

“Bitcoin will still remain king of the cryptos,” said Edward Moya, senior market analyst at Oanda Corp. “Bitcoin had too big of a lead for Ethereum to catch and has one major advantage, a fixed supply of only 21 million coins.”

Ether is up more than 900% over the past year, exceeding Bitcoin’s 275% climb. Given the huge gains, the debate on what crypto insiders call “the flippening” — a future where Ether’s value overtakes Bitcoin — will likely stay alive for a while yet.